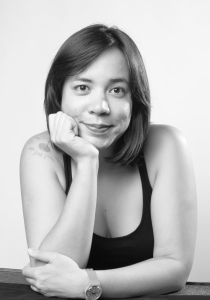 Emilia Yang is an activist, artist, and feminist researcher. Her work has been interconnected with digital media, performance, and public art. Yang is currently pursuing a PhD in Media Arts + Practice at the School of Cinematic Arts at the University of Southern California, Los Angeles. Her research interests and art practice span the role of memory in the political imagination and forms of political action and participation. She is interested in how transmedia storytelling and critical, feminist, anti racist and decolonial new media practices can foster social justice and civic engagement. Her art practice utilizes site-specific interactive installations, documentaries, fictions, games, performance, and urban interventions to engage participants in political action and discussion.

She is one of the creators of Downtown Browns an interactive series winner of the first prize at the “Diversity Challenge” organized by Games for Change, Interlude and Tribeca Film Festival. She is a HASTAC (Humanities, Arts, Science, and Technology Alliance and Collaboratory) 2015-2016 alumni, member of the Media, Activism and Participatory Politics (MAPP) project led by Henry Jenkins which is devoted to investigating new forms of media engagement and audience participation and Archeologies of the Present Research Lab led by Norman Klein, a project that undertakes an excavation of the present and its narrative forms, engaging in the investigation of historical moments in order to reflect on the present.

Emilia’s theory-practice work has been published in the book Sites of Protest, part of the series ‘Protest, Media and Culture’ published by MeCCSA Social Movements Network edited by Rowman and Littlefield and forthcoming in The Additivist Cookbook, curated by Morehshin Allahyari and Daniel Rourke.

Emilia completed an M.A in Communications at Penn State University. Her Masters’ project researched and archived the first social media protest to make it to the streets in her home country Nicaragua. She developed a participatory transmedia storytelling hub in a site called ocupainss.org with the objective to present the maximum number of stories and violations of human rights around this protest.